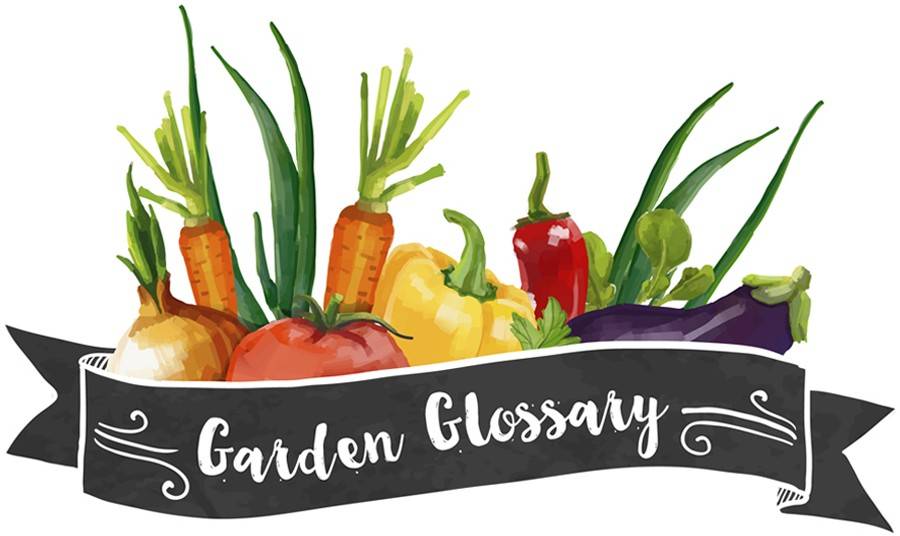 A great way to get to know our frequently used gardening terms!
You can also download as a PDF.

AMEND
To modify growing medium by working in materials to enhance it's properties. Soil amendments include organic matter such as compost, manure, and bone meal; as well as synthetic fertilizers.

BER
Blossom End Rot – occurs mostly in tomatoes and peppers and is caused by insufficient hydration, lack of essential nutrients (calcium and magnesium), and/or rapid growth.

BOLT
Bolting is the premature flowering of leafy vegetables (such as lettuce) and herbs. Occurs when the plant's growth rapidly increases from being leaf-based to being flower- and seed-based. Bolting is normally caused by temperatures that are too hot for the type of plant being grown, and usually renders the plant inedible.

BPA
Bisphenol A. A chemical used primarily in the production of polycarbonate plastics and epoxy resins. A controversial additive, BPA has been banned by the FDA in baby bottles, but is still considered safe for use in other food-related packaging. Typically found in #7 plastics. EarthBox products are BPA free.

CALCIUM NITRATE
A component commonly used in hydroponic gardening. A good source of calcium and nitrogen for tomato plants, which can help prevent BER.

CANNING
A safe method for preserving food if done properly. The process involves placing food–such as tomato sauce or pickles–in jars, and heating them to a temperature that destroys microorganisms that cause food to spoil.

CAPILLARY ACTION
Also known as "wicking," it is the ability of a liquid to flow in small spaces without the assistance of external forces, or even in opposition to gravity. Capillary action is how plants receive water in sub-irrigated planters.

COLD FRAME
A low, transparent-roofed enclosure used to protect young plants from severe weather (such as hail or driving rain) and low temperatures. Considered a type of greenhouse.

COMPOST
Organic matter that has been decomposed and used as a fertilizer and/or soil amendment.

COOPERATIVE EXTENSION
Under the USDA, Cooperative Extension Service offices are conveniently located in local government buildings. Your county extension service can provide you with information on food safety and quality; and gardening-related topics such as pests and disease on your plants.

CULTIVATE
To prepare or work on growing media, in order to plant and raise crops.

DEHYDRATE
To remove water from food in order to preserve and store it for extended periods of time.

DETERMINATE
Relating to varieties of "bush" or "patio" tomatoes, which are bred to grow to a compact height–usually around 4 feet. Determinate tomatoes stop growing when fruit sets on the top bud. The crop typically ripens at once over a 2 week period, and then dies.

DOLOMITE
Mined lime that has approximately 22% calcium and at least 11% magnesium. Dolomite is a soil amendment that aids in raising soil pH from an acidic state, and is essential for the production of fruit such as tomatoes and peppers.

FERMENTATION
The process of converting organic acids using microorganisms to preserve food, such as cabbage (sauerkraut).

FERTILIZER
Any material of natural or synthetic origin that is applied to growing media or directly on plant leaves, that supplies plant nutrients essential to the growth of the plant(s). Commercial fertilizers are tested for Nitrogen, Phosphorus, and Potassium and labeled with a guaranteed analysis.

GERMINATE
When a seed sprouts and a plant begins to grow.

GROWING MEDIA / MEDIUM
Also known as “substrate,” “potting soil,” "planting mix," or "potting mix." Growing media is a blend of materials such as peat, perlite, compost, or wood fibers or bark–usually soil-less–in which plants are grown.

GROWING SEASON
The part of the year during when your local weather conditions permit plant growth.

HARVEST
To gather, pick, or collect produce from crops.

HEIRLOOM
Referring to plants, old-time varieties or cultivars that date back prior to 1951. Heirloom plants are open-pollinated instead of bred like a hybrid.

HYBRID
A hybrid vegetable is created when breeders intentionally cross-pollinate two different varieties of a plant, with the goal to produce an offspring that contains the best traits of each of the parents.

HYDRATED LIME
More concentrated than dolomite, hydrated lime can neutralize soil acidity more quickly, but it is also difficult to work with because it is somewhat caustic and can burn the roots of plants or the user's skin if not handled properly. Hydrated lime is NOT a substitute for dolomite. Pickling lime, used in canning, is a form of hydrated lime.

INDETERMINATE
Relating to varieties of "vining" tomatoes. They continue to grow and produce fruit until killed by frost, and can reach heights of up to 12 feet. Indeterminate tomatoes bloom, set new fruit, and ripen fruit continually and at the same time throughout the growing season. They require substantial staking for support.

MULCH
A layer of material applied to the surface of an area of soil for the purpose of conserving moisture, reducing weed growth, and improving the health of the growing medium.

OMRI
The Organic Materials Review Institute. OMRI is an independent third-party non-profit organization that analyzes the components in fertilizers, horticultural sprays, growing media, soil amendments, and more to determine if the product can be certified for use in organic production, based on organic standards and guidelines.

ORGANIC (FARMING / GARDENING)
A method of crop production that eliminates the use of synthetic pesticides, fertilizers, herbicides, fungicides, and genetically modified organisms. Certified by the USDA, the term "organic" refers only to food and farm productions; other products (fertilizer or sprays) can be labeled "for organic production" if they do not contain chemicals that would prevent the operation or produce from being certified organic by the USDA.

PEAT (SPHAGNUM PEAT MOSS)
Peat is an important component of most growing media and seed-starting media. It holds several times its weight in moisture, and releases the moisture to the plants roots as needed. Peat does not break down readily, so one application lasts for several years. Peat does not contain harmful microorganisms or weed seeds that you may find in poorly processed compost. Most of the peat moss used in commercial planting mixes in the U.S. comes from remote bogs in Canada.

pH (SOIL)
The measurement of acidity and alkalinity of growing media on a scale from 0 to 14. On the pH scale, 7 is neutral. Below 7 is acidic, and above 7 is alkaline. Different types of plants require different pH levels, and growing media can be amended with different additives to adjust pH accordingly.

PRESERVE
To prevent the growth of bacteria or fungi on food, as well as slowing oxidation that causes food to turn rancid. Food preservation processes include dehydrating, pickling, fermenting, canning, smoking, freezing, jellying, and salting.

PROBIOTICS (GARDENING)
Introducing or reintroducing important nutrients to soil (in-ground) or growing media (containers) through microorganisms and compost to naturally fertilize and deter pests from crops.

PRUNE
To cut or trim a plant to remove dead growth, or to control new growth of the plant.

RECONSTITUTE
To restore dehydrated food to its original state by adding water to it.

ROOT BOUND
As plants growing in containers mature, developing roots may eventually run out of space. If this happens, the roots will try to escape out any drain holes in the container, resulting in a root mass in the water reservoir or roots growing out of the overflow drain.

STAKING
Propping, tying, and supporting a plant with a stakes or braces.

TRANSPLANT
To uproot a plant and replant it. Also refers to a plant that has been uprooted and replanted.

UV-STABLE
Incapable of degrading, disintegrating, or cracking from sun exposure for several years.

VERMICULITE
A gold-colored flaky mineral used for moisture-retention in growing media for plants.

VERTICAL GARDENING
A method of growing plants up (usually against a wall or on a trellis), instead of letting them sprawl out on the ground.

WINTERIZE
To prepare for use or storage in cold weather or during winter months.

ZONE
Refers to the USDA Plant Hardiness Zone, the standard to determine which plants are most likely to thrive in a particular location, based on postal code.